By late last night, I was feeling a lot better, so it looks like my dicky tummy was just down to something I ate (maybe the rich meal on Sunday? Who knows?) and so I felt a bit fired up to try another recipe.

I really enjoyed my bakewell buns, and as I made them with the Asda dessert yogurts, I figured I'd try another flavour yogurt to make different buns, so I went with the sticky toffee pudding yogurts to try sticky toffee buns!

To make the buns I crunched up the scan bran and then soaked them in water until they resembled wet weetabix with no big lumps left. I then added in the yogurt, sweetener, vanilla and beaten eggs and stirred well. I put the mix into a bun tin and then cooked for 25 mins at 180 degrees.

For the topping, I just mixed together the philly and toffee sauce. Once the buns had cooled I topped them - job done! 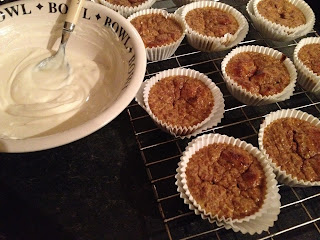 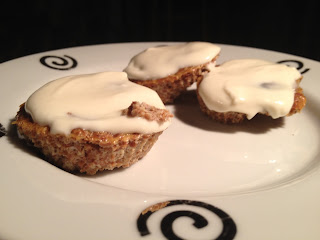 For 12 buns, it came out at 15 syns, so I'm allowing 1 1/2 syns for each bun to be on the safe side. I think in future I'd skip the philly light, and just top the buns with the toffee sauce, to keep the flavour more toffee-ish. It'd also bring the syns down, as I could use 30g of the sauce for 6 syns, and that would make the buns a syn each. I reckon a drop or two of boiling water in the sauce would just make it runny enough to spread on the buns nicely....maybe top with a slice of banana as well to make banoffee buns?

I think I'll be making these again for a taster party next week - I'll let you know how the variations go :)