Back To The Olympics

I am feeling SO much better today! I'm still in night mode though, despite not actually being at work for most of the week my body clock is making the most of it and I haven't slept before 5am once this week. I guess it's not so bad as I'm working nights again next week! It's one of the few times my wonky clock isn't a bad thing :)

I'm sure one of the things helping me this time with my weight loss is the abundance of SW groups on Facebook. My group has a page, and I'm also a visitor to a couple of others. (This blog has it's own page as well...hehe...) It's a brilliant way to get a wealth of advice, recipes and ideas, and making friends with other SW'ers is yet another way of keeping me on plan (along with this blog and all it's wonderful readers of course!). After I woke up today, I was browsing a green day page on FB, and found a picture of someone's brunch, and that was it. I knew what I'd be having for my first meal today - I say first meal, I'm not entirely sure what to call the first meal of the day when eaten at 5.30pm lol! 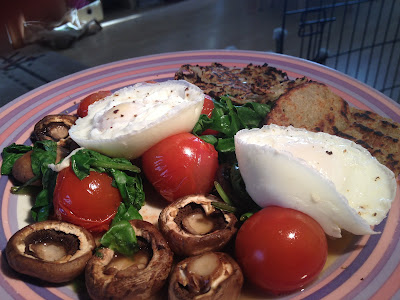 The lovely FB'er was inspired by the Hairy Bikers, and had watercress with her tomatoes, mushrooms, watercress and poached eggs. I varied slightly with spinach and some homemade hash browns. It was a nice change and, as always, nice and easy! I just put the mushrooms and tomatoes in the oven for about 10 minutes, and threw the spinach on top for the last couple of minutes. Whilst they were cooking, I (again, for I, read Hague) grated some potato and mixed with a wee bit of frylight and salt and pepper. Then he squeezed out the excess in the potato ricer and fried the hash brown in fry light whilst the eggs were poaching. The eggs were poached in good old silicone poachers, so the whole lot was done and dusted in around 10 minutes. Just perfect for a weekend brunch, I followed it with a banana and one of my crumble yogurts.

As promised, my Olympic journey is restarting today (I know it's just in time for the end, but never mind). Today I'm visiting ...... 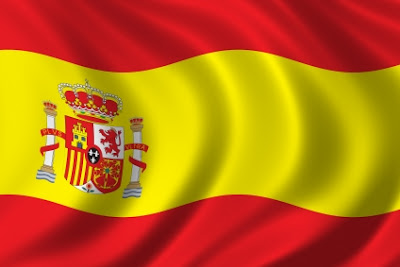 Viva Espana! I pondered some tapas, but that would be quite a lot of effort - so I decided on some veggie paella!

I chopped the onion and put that, the garlic and about half of the stock into a large frying pan and let it cook for about 10 minutes. I then added in everything else, covered the pan and let it simmer until the rice was cooked (about 20 mins). I did check on it every now and again to stir it, and added a little bit more stock, and a bit of passata (as it was in the fridge), but after half an hour or so it was done, so I served it up, and put on a little bit of lemon juice. Lovely :) 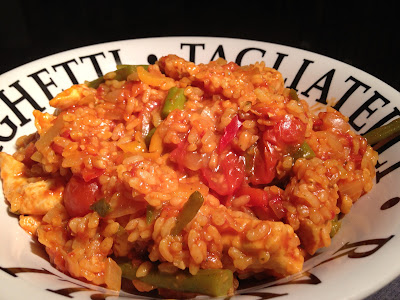 I know it's not "proper" paella, but it tasted lovely - really filling, and if I'm honest, there was enough there that I could have had some leftover for another day. I am attempting MORE cooking today as well though, baked egg "custard" for dessert. I saw the recipe on a friends FB page and it just looked too good to be true, so I thought I'd give it a whirl....

I beat the eggs and then mixed in all the other ingredients (using about a capful of the vanilla extract). I then poured the mixture into an oven proof dish and placed that in a bain marie (another oven proof dish with boiling water in it). I then sprinkled the custard with a little bit of cinnamon and nutmeg and baked it until set (around 45 minutes). 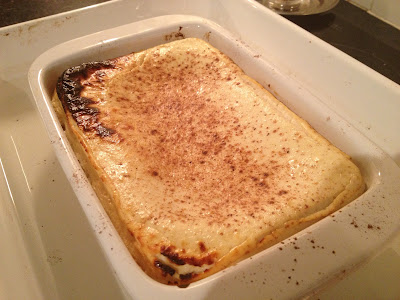 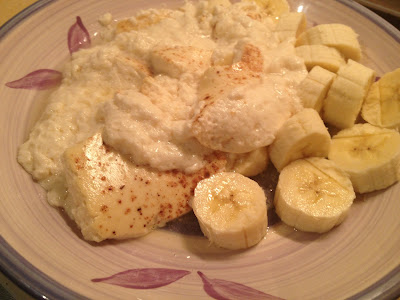 I'll be honest, it didn't taste that great...I'd rather just have the yogurt and a bit of honey on the banana. The flavour wasn't really there I'm afraid....It might work better with vanilla yogurt and a bit more vanilla essence, and to be honest, I'm not sure it was properly set. Not one for the recipe book I'm afraid :(

As you may have noticed, I haven't yet had my HE's today, so later on, I'll have some laughing cow triangles, an apple and some cereal bars as a snack before bed, to make sure I get them in. I won't be going to bed for a while yet, need my paella and "custard" to go down!

It's definitely been a bit of a hungry day today, but that's not surprising really when I've not eaten huge amounts this week, and it definitely seems like I'm back to normal. Hopefully the weather will hold tomorrow and I can get out for a walk as well as trying out some more cooking!