As well as being obsessed with Slimming World, I'm also obsessed with my iPhone and the apps you can get for it. I have way too many, but quite a few are useful if you're following Slimming World, one of course, is the official app. There is a hell of a lot more it could do if I'm honest, I've used apps that can add food to your daily diary and show you the calories with just a scan of the packaging (My Fitness Pal), so you'd have thought that SW could compete with that, unfortunately the app only gives you the basics, but if you are a member of Lifeline Online, you can search for syns on it, which is a lifesaver if you're out shopping, or out and about. The other app, I've had for a while, but haven't had much chance to use, and that's a pedometer. This one measures the calories you've burnt and the steps and distance walked. I thought I'd give it a go as I'm back on the line, and doing much more physical work, but I was shocked at just how much I walked! 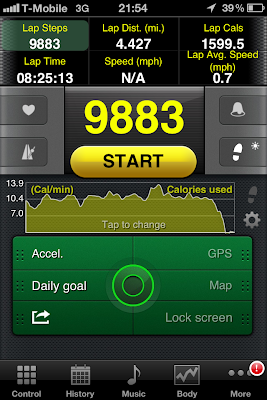 I'm back on the line full time now, so if activity like that every day doesn't help me lose weight I don't know what will! That was only my shift at work as well (although to be fair, I wasn't particularly active before or after!!)


Bed was more important that an extravagant breakfast again this morning, so I had a quick omelette stuffed with Laughing Cow Light triangles and a salad, it did the job and was ready in less than 10 minutes! 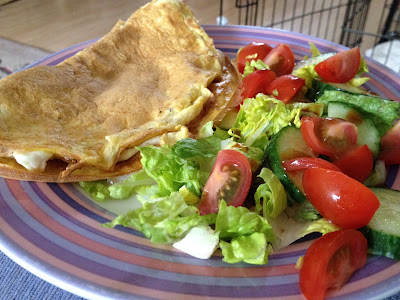 Leftovers came to the rescue again for work, it really is a lifesaver to make just a bit too much of every meal, it gives you so many options when time is short or when you just can't be bothered to make something from scratch! Today's lunch bag contained some more tomato soup, some of last nights couscous and the usual cereal bars, yogurt and apple, so the main part of the meal was leftovers :)

Dinner, as always was another quick one, again Hague had it ready for me, but again, it was a quick meal, maybe 15 minutes, if that, to do, and it tastes so luxurious and not "diety" at all. 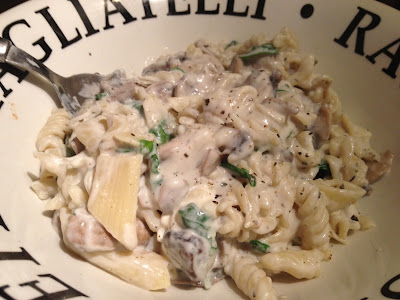 It really does look utterly synful doesn't it? But it's not!


Cook the pasta, and whilst it's cooking, chop up the mushrooms and cook them in some frylight, when they're nearly done, stir in the spinach to wilt it. Drain the pasta and mix in the mushrooms and spinach. Weigh out your 75g of cheese and throw it in with the pasta and a smidge of water (maybe a tbsp or so) and stir. The cheese will melt down into a creamy sauce, if it still seems a bit stodgy, just add a tiny bit more water and voila! A delicious dinner (and the pasta for the next day if you so desire!)


This is fast becoming one of my favourite recipes, although I think I might get some plain soft cheese next time and add some Stilton into it....creamy blue cheese sauce! Divine!


It's my weigh in tomorrow morning. My normal group is on a Tuesday evening, but due to working 2-10pm this week I weigh in on a Wednesday morning on this week. It's the reason I chose this group, as I have no excuse not to go every single week, whereas if I'd have gone to my closest group, I would have had to miss a week, which can lead to "Oh it's 2 weeks until I weigh in again - this won't hurt" type behaviour, which I wanted to avoid. So wish me luck, after that pesky lb re-appearing last week I want to lose at least 2lbs this week to even it out :)


Fingers crossed!
Posted by Unknown at 23:23