I'm a bit grumpy today. The wonderful week off work is drawing to a close, and my alarm will be going off at 4.30 tomorrow morning :(  Unlike the last two days when I'd woke up at a reasonable time, I was in bed til 1.30pm today, not the cleverest thing to do when you have to be in bed early! Ah well, I've managed to cram quite a lot into the day anyway!

I fancied a change this morning, so just had some lovely fruit and yogurt for breakfast. A nice tropical feel with some pineapple and banana to keep that sunny feeling going despite the grey clouds hovering ominously over Yarmouth today. 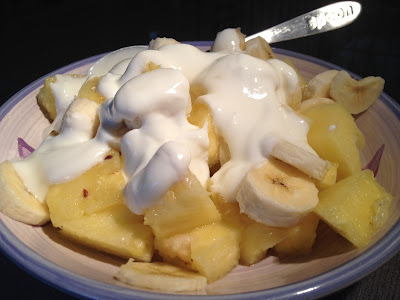 Once I was all fuelled up and ready to go I headed to Gorleston for the Clifftops Festival, for some reason I thought it would be a good idea to take The Boo. Claire was there with some other local consultants and I was looking forward to seeing them, however the weather had other ideas. As I meandered along, trying to stop The Boo eating every single dropped item of food on the entire promenade the weather took a turn for the worse, by the time I got to the Slimming World stall, the thunder, lightening and rather black clouds had just about everyone hurrying to their cars...At least I got some body magic done (2 miles walked), and Bayleigh did her bit to make sure there wasn't any mess left behind! 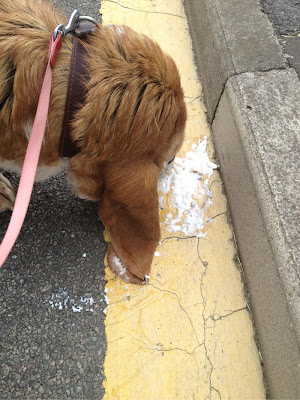 It really started coming down as we walked back to the car, but we managed to make it home without getting to wet. As the weather had turned, and I'd been out I decided that today would be the day I'd come over all a bit Nigella and try out a few things I'd been wanting to try. I decided on Cheesey CanneLowLowni and Cherry Bakewells (it was going to be Cheesey LowLowsagne but not a pasta sheet to be found in the cupboard!).

Now, I apologise in advance if you've come to enjoy my super quick, super lazy recipes as this one is a bit more of a faff. It also highlights why I've had cannelloni tubes in my cupboard for a long, long time!

I poured half a tin of chopped tomatoes, mixed with a little bit of lazy garlic and pepper into the bottom of a small oven dish as the base and then I fried off the mushrooms, courgette and spinach in some fry light (yes, those again, those were the fresh veggies I bought last week lol) and once they were nicely softened I added in the tub of LowLow and some pepper and gave it all a good stir to combine it. Now comes the fun part....I stuffed the mixture into the tubes. This involved the patience of a saint, much swearing and two spoons, seriously, if you have lasagne sheets, just layer it! I stood each tube in the empty LowLow tub and slowly and painstakingly spooned the mixture in with a teaspoon, shoving the mix down the tube with the end of another spoon. Once each was full I put it onto the tomato mix until the oven dish was full. This took approximately 37 times longer than just layering them onto lasagne sheets would have done.

Once the swearing had stopped, I beat an egg, mixed in about half a pot of natural yogurt and a sprinkling of nutmeg and poured that over the cannelloni, topped it with my HeB of grated cheddar and baked it for 30 mins. 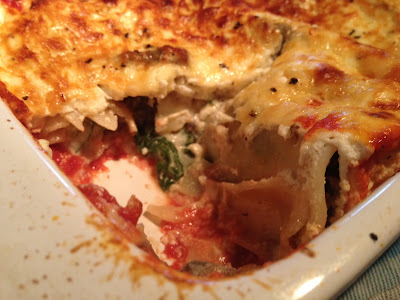 I know I'm saying so myself, but it tasted utterly delicious! The yogurt topping works like a bechamel type sauce, and the LowLow gave the filling a lovely, cheesy taste. A definite winner (although maybe as a lasagne lol).

The baking wasn't finished though! I'd seen a recipe for Scan Bran cherry bakewells and thought I'd give them a go. Now, there are two recipes for this, the one I saw, and the one I made lol! This is the one I made :)

I crumbled up the scan bran and mixed them with some boiling water until they could be mixed up. I beat the eggs and added in the yogurts and sweetener, then I spooned the mix into cake cases and baked them for 25 minutes. Once they'd cooled I put the topping on, that's it! You could top them with a cherry if you wanted, but I'm not a fan! 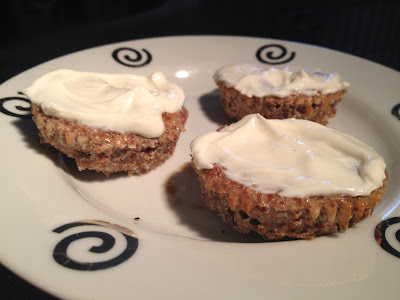 So there they are, little cherry bakewell cakes that are a syn each, and are absolutely gorgeous. All you can taste is the bakewell tart flavour of the yogurt and the sweetness of the Philly topping. If you're using the Asda yogurts, you won't need the almond essence. Just a perfect little nibble of sweetness to have with a coffee or cuppa! Give them a go, quick, low syn and sooo yummy!

Hopefully with such a busy day I'll sleep tonight - back to the shifts and a slightly adjusted menu once again to cope with a stupidly early shift! As always, let me know what you think of the recipes if you give them a go!