Body Magic is the Slimming World way to exercise. Normally I'd leave thinking about exercise until much later on along my journey, but I'm petrified of being left with tons of loose skin and ending up untoned. Being back at my factory job is helping when I'm there, but as it's my week off I decided I needed to make an effort to keep up with the exercise.

Monday and Tuesday were sorted as I had to drop the car at the garage, and so that meant a walk there and back to pick her up again. Today I hadn't planned on doing anything except walking The Boo.. 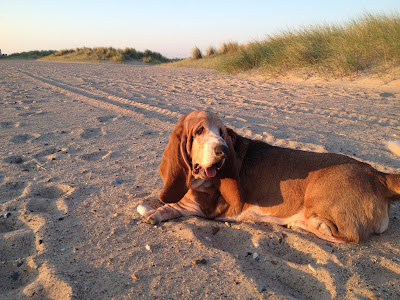 Much as I love walking her, it's not so much exercise as a slow meander as she sniffs just about everything along the way, and so I felt I needed something a bit more vigorous so I headed out for a walk. I wasn't entirely sure where I was going but I ended up walking along the sea front and back and completed 2.4 miles in 40 minutes, pretty darn quick for me! It was quite enjoyable as I kept up the pace and had my music playing away. I'm sure I'll back it a regular thing whilst I'm not at work.

Before all that excitement though, much food has been eaten :) I've had a seriously hungry day today, in fact I woke up after less than 6 hours sleep because I was hungry and decided to do myself a bit of a fry up. 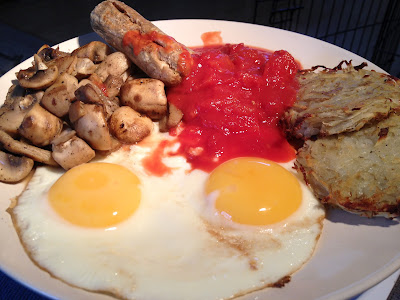 I attempted my own hash browns, and they actually came out quite well, although they needed a bit more cooking time. They were pretty easy if you want to have a go though. I grated up a smallish spud and then gave the grated potato a good squish in some kitchen roll. Then I put about half the potato into my potato ricer and gave it a good hard squeeze to get all the liquid out (and then did the same with the other half) The squeezing also kept the grated potato in shape. I just bunged them in the oven with the sausages (for about 20 mins) but in all honesty they needed some more time to be cooked through and a bit more crispy. I rckon you could slow fry them too! Syn free hash browns though.....worth a go?

As I said, it's been a hungry day, so a couple of hours or so after breakfast I was feeling peckish again so I dived into the fresh pineapple that Hague had cubed up yesterday (isn't he marvellous?). 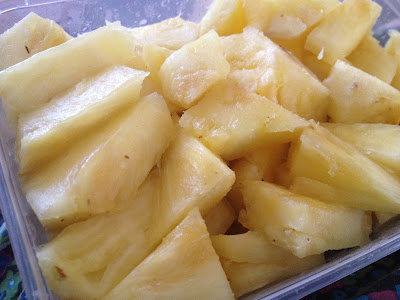 I could seriously eat pineapple all day long, but a few chunks eased the hunger pangs until lunch. 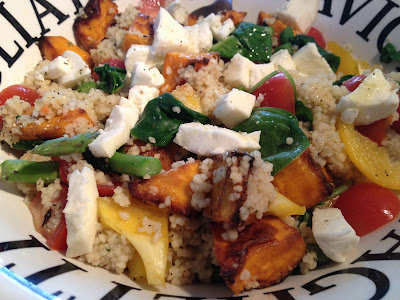 Which was bloody lovely, even if I do say so myself. Just some couscous (soaked in veggie stock and dried herbs) and tons of veg, including the leftover butternut squash from the other night. Topped with 45g of Mozzarella (HeA) and 1/2 a teaspoon of olive oil (1 syn) which was plenty enough to get that lovely flavour through without overdosing on syns.

For dinner, I tried another new purchase, the LowLow cheddar cheese spread. I'd heard good things about how cheesey it was and thought I'd have it with pasta, broccoli and cauliflower. 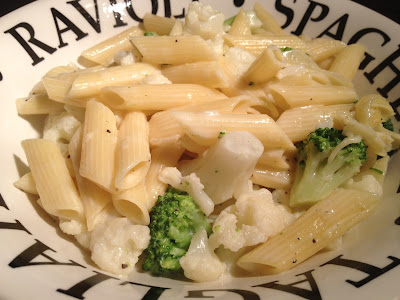 As you can see, it doesn't look very cheesey. That was my fault. I had presumed that the spread would be like soft cheese and need a bit of water, so I threw in the veg straight from the microwave including the water. So unfortunately it was a bit of a watery sauce. However, it did taste very nice (I had the cracked pepper one) and in future I'll know not to add any extra water!

After that, I had room for dessert (told you I was having a hungry day, must be that walk!) I had my version of Banoffee Pie. 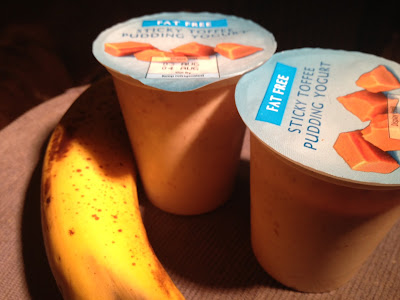 I do absolutely adore the Asda dessert style yogurts, they may not be as creamy as some, but they taste delicious! Banana courtesy of my SoW basket :)

So as you can see, I've had a very hungry day, but I'm well under my syns, and we all have days like this. It's why I love the Slimming World plan so much, I don't have to stop eating when I reach my calorie limit or restrict myself so I'm hungry and miserable. Just perfect for me :)

So another hungry day survived, and the first steps made on my Body Magic journey, who knows, perhaps the bike might get an outing this week?