A Bit of Time

I do rather enjoy my weeks off work. As well as being able to do whatever I want, it also gives me the chance to try out some recipes for myself that might be a bit too much work for a nice quick dinner before or after work. Much as Hague enjoys cooking for me, I wouldn't want to ask him to make really involved dinners for me when time is rather precious.


I had to be up early today to get the car into the garage, and I thoroughly enjoyed the lovely stroll back in the sunshine (all 1.8 miles of it). I headed back to bed though, can't be getting up too early when I have the chance for a lie in!


For brunch today I thought I'd give Magic Pancakes a go. I've seen these a few times on several of the Facebook Slimming World pages and put 35g of plain porridge oats and 2 pots of Asda dessert style yogurts, banoffee flavour into a bowl together, gave them a stir and left them in the fridge overnight. When I was ready to eat I whisked up an egg and added a couple of teaspoons of sweetener and mixed the lot together. It did look quite batter like, and the "pancakes" looked promising as they slowly cooked in the pan.....however, they refused to turn over and the first batch ended up looking like scrambled eggs! I liberally sprayed the pan with frylight before having another go, and while these were slightly more successful they still were quite quick to disintegrate! 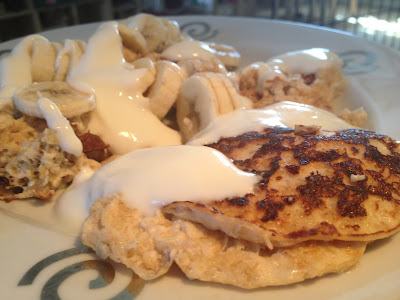 If you just focus on the front of the picture....that'd be fine! I served them up with a sliced banana and some natural yogurt. After a bit more research, when I give them another go I'll add another egg and see what happens. They tasted okay though, although I'm not sure they needed any sweetener added!

For dinner, I decided to try another of my Tesco discoveries, BBQ Frylight, it's been the talk of both my group and the Facebook pages. I roasted some butternut squash, and then in a separate dish put a couple of quorn fillets, a red pepper, half an onion and a few mushrooms and doused quite liberally with the frylight. I put the lot in the oven for about 20-25 minutes and when it was done I served it all up with a salad, and voila! Dinner! 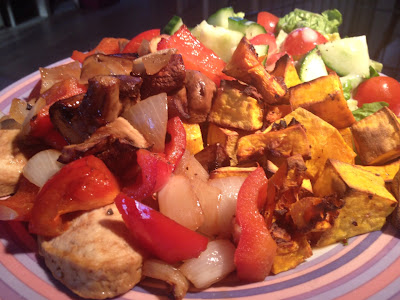 BBQ Frylight gets a big thumbs up from me, it added a lovely taste to the veggies and quorn fillet and as it's syn free I think I'll find other uses for it too. I still have some butternut squash left to use another day as well (which is a good job really as Hague has made it clear he won't be chopping another one up anytime soon!)


As I'm having a bit of a hungry day today, it got to 9pm and I was feeling hungry again. As I've not had any HeA's today, and I fancied something snacky, I decided on some nacho style potato wedges :) Wedges with some tex mex seasoning, a salsa style sauce and 2 HeA's worth of grated cheddar. Popped under the grill until the cheese melts! Delicious and they taste oh so naughty but are syn free! 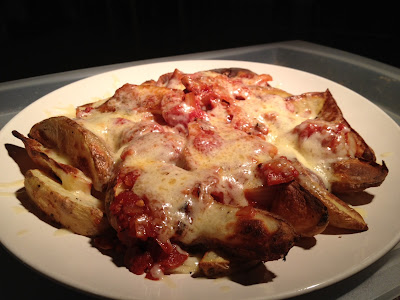 Dice the onion (not the lazy, half effort I managed..) and fry off in some frylight with the chilli and garlic. When the onion has softened, add about a third of a tin of tomatoes and plenty of salt and pepper. Leave to simmer on a low heat for about 5 mins. You should really add some coriander for a more authentic taste, but 1) I don't have any, and 2) I hate coriander :)


I actually walked quite a bit today as well, with walking back from the garage, and taking Boo out for a nice walk on the beach when it got a bit cooler, so my pedometer doesn't look too bad, although nowhere near a working day! 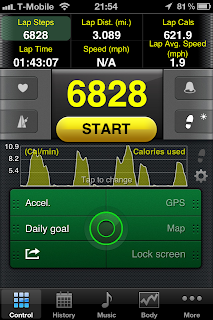 It's weigh in tomorrow as well. I need 1lb to get my 1 1/2 stone award. Of course I'd love to get the award, but I won't be disappointed if I've not made it this week, after all I had a syn heavy weekend (which I thoroughly enjoyed) and if the sticker has to wait until next week so be it :)